Win a Book Deal with Walter Foster! Sign up for our email list for updates and information.

Throughout the book, artists Diane Cardaci, Nolon Stacey, Linda Weil, and Diane Wright offer practical drawing techniques and easy-to-understand, step-by-step instruction, but also encouraging words. The journey through Step-by-Step Studio: Drawing Lifelike Subjects is not about making perfect drawings; it's about achieving likeness and drawing skills with each new project, while having a great time.

The books in the Step-by-Step Studio series introduce beginning artists to the fundamental tools and techniques of their chosen medium. Easy-to-follow, step-by-step projects help beginners hone their skills while creating artwork across a variety of subjects, from still life and landscapes to animal portraits and botanicals.

Diane Cardaci was classically trained at the Art Students League of New York City, Parsons School of Design, and the School of Visual Arts. Her passion for both realism and nature led her to start her professional art career working as a Natural Science Illustrator in New York City, where she specialized in medical and natural science illustrations. Her work has been published by the American Museum of Natural History in New York City, as well as by major textbook companies such as Holt, Rinehart, and Winston. After studying portraiture with nationally acclaimed artists such as Nelson Shanks and John Sanden, commissioned portrait work soon became an important part of her artwork. She is a signature member of the American Society of Portrait Artists and has contributed writing for the organization's publications. Diane is also a member of the Colored Pencil Society of America, the Graphic Artists Guild, and the Illustrator's Partnership of America.

Nolon Stacey is a self-taught graphic artist who specializes in realistic portraits of animals, people, and landmarks. As a child in South Yorkshire, England, Nolon cultivated his interest in drawing throughout school. He eventually earned a degree in mathematics from Warwick University, but he soon returned to his artistic passion. He currently lives in Boroughbridge, England, and undertakes a variety of commissioned work, ranging from portraits of people and pets to buildings and street scenes. Prints of Nolon's celebrity portraits are published through Kadinsky Art. His work also is sold through Braithwaites Gallery in York, England. Nolon lives in Boroughbridge, England.

Linda Weil (Melbourne, Australia) is a graduate of RMIT University who began her career in graphic design, primarily in the print industry. She has been art director and illustrator for a number of Australia’s national magazines, and she has specialized in botanical and natural history illustration. A member and past secretary of the Wildlife Artist Society of Australasia, and a member of the Australian Guild of Realist Artists, Linda teaches drawing to both beginners and advanced students. Her work has won numerous awards, and she exhibits in galleries and shows throughout Australia. Linda has traveled widely throughout Australia, France, Borneo, the United States, and South Africa, and many of her drawings are inspired by the animals and sights she sees on her travels.

Diane Wright received a bachelor's degree in fine art with a teaching certification from the University of Northern Iowa in 1981. After a break that lasted more than 20 years, Diane picked up her art pencils again in 2002. During this break, she devoted her time to her family and building a career in computer technology. With her children, Matt and Becky, in college, Diane now spends her free time re-exploring her love for art. She keeps quite busy with creating commissions, selling her artwork on her website, building online tutorials, and conducting drawing classes. She also offers printing services for graphic artists. Diane lives in Mitchellville, IA.

Techniques for Drawing on Location from Unexpected Perspectives

My Day in Small Drawings

Drawing Is for Everyone

With Over 100 Different Themes - Including Sea Creatures, Doodle Shapes, and Ways to Get from Here to There

20 Ways to Draw Everything

Color Super-Cute Cats in All Their Glory

Learn How to Draw 75 Cats in All Their Glory 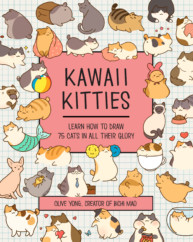 A Sourcebook of 400+ Motifs and Beginner Stitch Tutorials

How to Embroider Almost Every Animal

Learn How to Draw 75 Cuddly Creatures

Includes Over 50 Pages of Lessons & Tips to Create Comics, Graphic Novels, and More!

Step-by-Step Drawing for Characters and Personality - For Artists, Cartoonists, and Doodlers

Draw 62 Things in Nature and Make Them Cute

How to Build a Practice for Sketching on Location

Draw Like an Artist: 100 Birds, Butterflies, and Other Insects

Step-by-Step Drawing for Figures and Personality - For Artists, Cartoonists, and Doodlers

Draw 62 Characters and Make Them Happy

Step-by-Step Drawing for Characters and Personality - For Artists, Cartoonists, and Doodlers

Draw 62 Animals and Make Them Happy