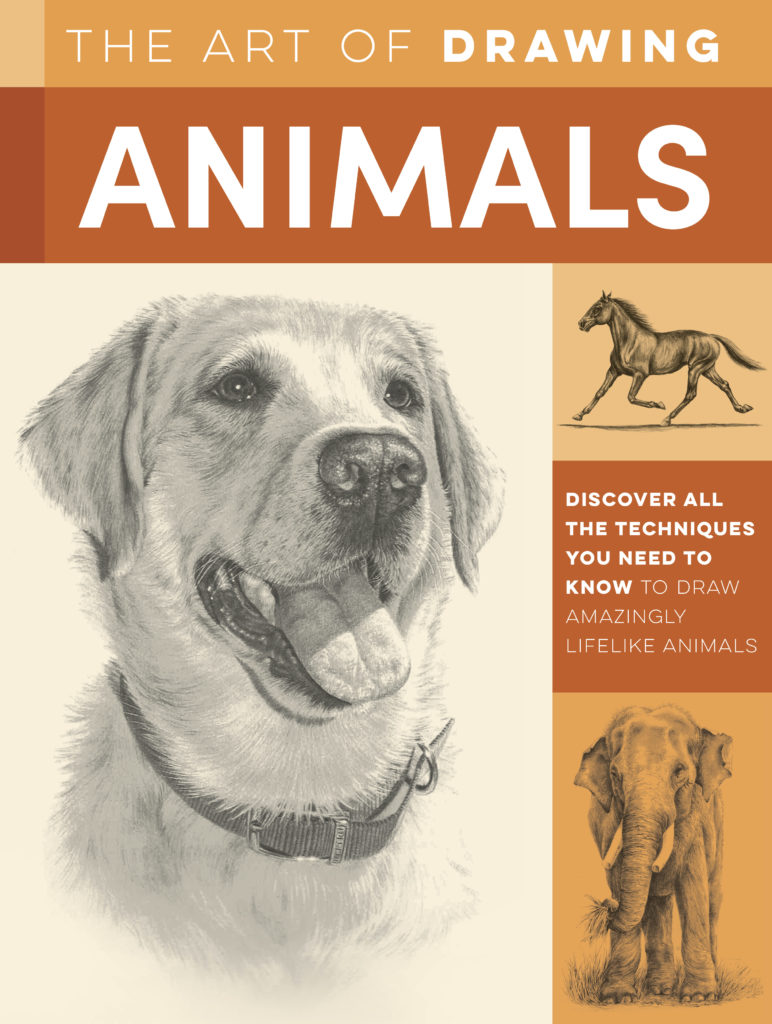 Learn to draw a wide variety of cute critters, pampered pets, wild animals, and much more with The Art of Drawing Animals!

Featuring an array of adorable pets and majestic wildlife, this book offers simple step-by-step instructions for drawing dozens of incredibly lifelike animals. Inside, five talented professional artists reveal their tricks from the trade for drawing the features that are unique to our furry and feathered friends, from wet noses and expressive eyes to thick fur and delicate whiskers.

The book opens with essential information about drawing tools and materials for both graphite and colored pencils, followed by instructions for approaching a drawing, such as building up forms with basic shapes, tracing photos, and using photo references. The inspiring projects are divided into sections by animal type for easy reference and guide readers on making initial sketches and detailed shading to adding finishing touches. As you progress from project to project, you will find a range of helpful topics, such as portraying accurate proportions and creating dynamic compositions.

Among the amazing animals you'll learn to draw in realistic detail:

Packed with beautiful illustrations and expert instruction, The Art of Drawing Animals is a comprehensive and indispensable resource for all artists smitten with the animal kingdom.

A native of Boise, Idaho, Cindy Smith has been producing artwork since early childhood. Although wildlife is her favorite subject, Cindy enjoys the challenge of creating remarkably realistic pencil drawings of anything—from people and buildings to flowers and automobiles. She also employs a variety of other media, such as oil, acrylic, and watercolor pencil; her collection of works even includes digital art and videos. Cindy spends many weekends camping, fishing, and taking photo references for her art in the mountains and deserts of Idaho with her family.

Nolon Stacey is a self-taught graphic artist who specializes in realistic portraits of animals, people, and landmarks. As a child in South Yorkshire, England, Nolon cultivated his interest in drawing throughout school. He eventually earned a degree in mathematics from Warwick University, but he soon returned to his artistic passion. He currently lives in Boroughbridge, England, and undertakes a variety of commissioned work, ranging from portraits of people and pets to buildings and street scenes. Prints of Nolon's celebrity portraits are published through Kadinsky Art. His work also is sold through Braithwaites Gallery in York, England. Nolon lives in Boroughbridge, England.

As a young girl, Patricia Getha spent many summers looking after and showing horses. Drawing played a large role in Pat’s life from an early age, but it was a love of horses that enabled her to master the subject. With formal training in commercial and graphic arts, Pat is proficient in a variety of media, including watercolor, graphite, oil, and colored pencil. She is active in juried competitions and has won several awards for her exquisite equine artwork. A mother of four young children, Pat currently resides in Ohio and works primarily as a commission artist.

Linda Weil (Melbourne, Australia) is a graduate of RMIT University who began her career in graphic design, primarily in the print industry. She has been art director and illustrator for a number of Australia’s national magazines, and she has specialized in botanical and natural history illustration. A member and past secretary of the Wildlife Artist Society of Australasia, and a member of the Australian Guild of Realist Artists, Linda teaches drawing to both beginners and advanced students. Her work has won numerous awards, and she exhibits in galleries and shows throughout Australia. Linda has traveled widely throughout Australia, France, Borneo, the United States, and South Africa, and many of her drawings are inspired by the animals and sights she sees on her travels.

Debra Kauffman Yaun discovered that she had a knack for drawing people when she was a young girl growing up in Tampa, Florida. After graduating from the Ringling School of Art and Design in Sarasota, Florida, Debra worked as a fashion illustrator. She has drawn and painted many commissioned portraits, several of which have been of children—her favorite subject to draw. Debra's artwork has been published in several art magazines and books, and she has won numerous awards, including an international prize. She is a signature member of the Colored Pencil Society of America, having served as president of the Atlanta chapter, and she is a juried member of the Portrait Society of Atlanta. She also enjoys teaching classes and workshops in portraits and colored pencil. Debra lives in Buford, Georgia.

Design and Create Anime and Manga Characters with Diverse Identities of Race, Ethnicity, and Gender

Saturday AM Presents How to Draw Diverse Manga