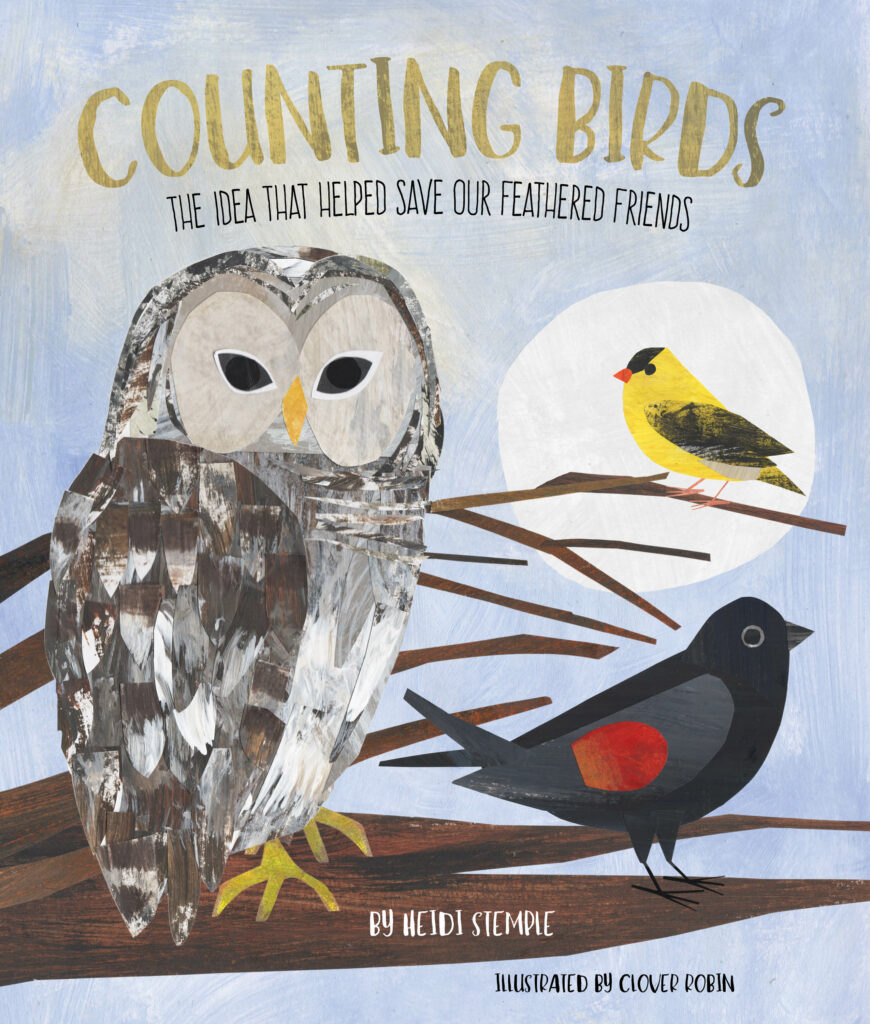 Everyday kids learn how they can help protect bird species, near and far, with the award-winning book Counting Birds—the real-life story behind the first annual bird count.

What can you do to help endangered animals and make a positive change in our environment? Get counting! Counting Birds is a beautifully illustrated book that introduces kids to the idea of bird counts and bird watches. Along the way, they will learn about Frank Chapman, an ornithologist who wanted to see the end of the traditional Christmas bird hunt, an event in which people would shoot as many birds as possible on Christmas. Chapman, using his magazine Bird-Lore to promote the idea of counting birds, founded the first annual bird count.

More than a century after the first bird count, bird counting helps professional researchers collect data, share expertise, and spread valuable information to help all kinds of birds around the world, from condors to hawks to kestrels and more.

Counting Birds introduces kids to a whole feathered world that will fascinate and inspire them to get involved in conservation and become citizen scientists.

Heidi Elisabet Yolen Stemple grew up in Hatfield, Massachusetts, and after 18 years of living elsewhere, she has returned. She has also returned to the family business—writing children’s books—after working as a probation/parole officer and a private investigator. Heidi is Jane Yolen’s daughter and sometimes writing partner. They’ve co-authored several books together, including their History Mystery series (S&S) and Not All Princesses Dress in Pink (S&S). They also worked together on the nonfiction middle-grade Bad Girls: Sirens, Jezebels, Murderers, Thieves, and Other Female Villains (Charlesbridge, 2013), and their most recent picture book, You Nest Here with Me illustrated by Melissa Sweet (Boyds Mills Press, 2015). Heidi "starred" in her mother's 1988 Caldecott-winning book, Owl Moon.

Clover Robin is a surface pattern designer, collage artist, and illustrator. She grew up in glorious Devon before training at and graduating from Leeds College of Art and Design in 2007, and then earning a master's degree from Central Saint Martins in 2009. Clover delights in nature and all things botanical, inspired by a childhood of woodland walks, countryside rambles, and fossil hunting by the sea. She is currently based in Greenwich, London, where all of her artwork is lovingly handcrafted and created. She is the illustrator of the books Cut Paper Pictures and Counting Birds. Clients include: Paul Smith, Mollie Makes, Samworth Brothers, Project Calm Magazine, Angel Cab, Otter Garden Centres, AB foods, Princeton Architectural Press, The National Trust, Little Tiger Books, Filbert Press, Quarto Books, Macmillan Publishing, and Almanac Cards.